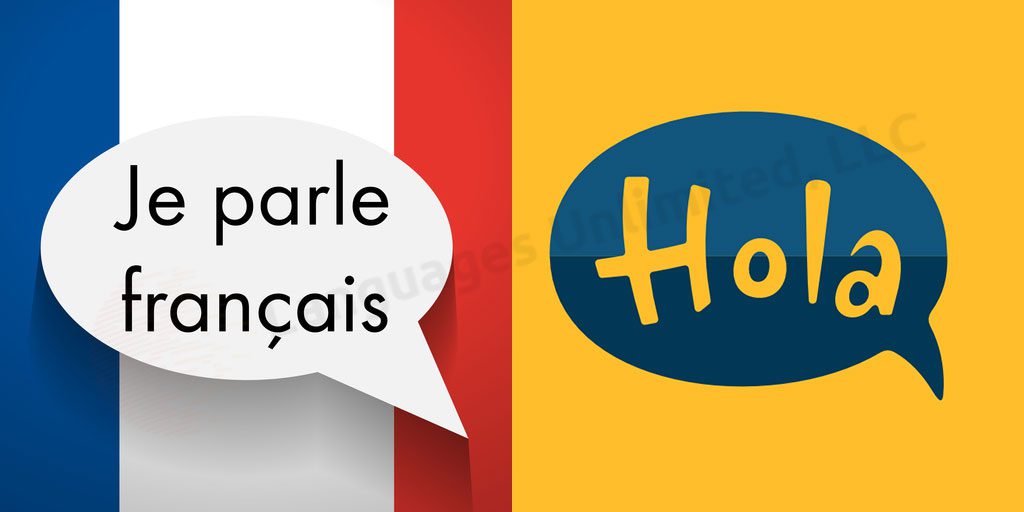 Which Language is The Best?

If there is one thing most of us are clear about, it is that English is one of the most spoken languages in the world, as is Chinese, which has proven to be an admirable rival.

However, while these two giants are vying for the top spot in the world, there are two languages that are fighting to become the second most predominant language. Spanish and French, a battle that has been raging for centuries.

How did this battle begin?

Until a few decades ago, French was taught as a second language in many schools around the world. However, when English became more popular and consolidated itself as a universal language, most schools began to teach it, making French feel a bit displaced, while Spanish began to gain popularity due to the large number of Spanish speakers who emigrated to other countries.

Does this mean that French is no longer spoken anywhere in the world? Absolutely not. French is one of the most widely spoken languages in the world, with approximately 280 million people practicing the language. However, if we compare them with the 534 million Spanish speakers on the planet, it is not difficult to discover who has won this first contest.

In which countries are both languages spoken?

To better understand this language war, we need to know the battlefield, since the Spanish and French-speaking countries are only a few kilometers apart. Let’s go to Spanish first.

As most of you know, the main countries where Spanish is spoken are Spain and the entire Latin American region. Thisincludes Argentina, México, Venezuela, Colombia, Ecuador, Uruguay, Peru, Bolivia, Chile, Puerto Rico and the DominicanRepublic, just to mention a few.

On the other hand, French is established in France, Canada, Belgium, Switzerland, India and most of Africa, with the Democratic Republic of Congo being one of the countries with the largest number of French speakers.

So why isn’t French more widely spoken than Spanish? It’s because of what I’m about to tell you, which could change everything.

The practical use of the language

The main difference that exists between Spanish and French is due to how much you hear these languages in the streets. While for logical reasons it is not news that people in Spain and France speak their respective languages, the real differences appear when visiting some of the countries that practice them.

While it is true that French is a very prevalent language in Africa, most people use it to read a sign or menu, but rarely to talk to family and colleagues.

This is because Africa is a continent where a large number of languages dominate, so it is common for its inhabitants to speak in their regional languages, and use French to communicate with a tourist.

On the other hand, Spanish-speaking countries do not have this problem. If you travel anywhere in Latin America, with some small exceptions, such as Brazil, you will see people speaking Spanish the same way they speak it in any city in Spain.

But wait a minute. I’m sure you noticed the trap I just dropped you. Can we say that it’s the same Spanish spoken in Spain that is spoken in countries like Salvador, Mexico or Guatemala?

Differences in Accent, Pronunciation and Grammar

If you are learning Spanish and plan to travel to any of these countries, you will probably notice some differences between one and the other. This is no coincidence, as each region has its own accent, as well as its own local words.

While a Mexican would call a young man “chavo”, an Argentinean would call him “pibe”. That’s why the more widespread a language is, the more differences you can find between one and the other, which is one of the main reasons why so many companies turn to translation specialists who can understand local slang.

But enough about accents. Let’s get back to the language battle. Knowing everything we’ve learned in this video, is it possible for French to become the second most spoken language in the world?

The answer lies in Africa.

Why is Africa so important for French?

As you know, Africa is a continent where French has a lot of popularity. If the French government manages to play its cards correctly, it could increase its dominance and establish itself definitively in the continent.

While it is true that France and Spain managed to establish themselves in so many countries through their territorial conquests, which date back a few centuries, today the global scenario is totally different.

Even if there are countries at war, the concept of imperialism, which consists of having colonies around the planet, has completely disappeared. Right? Maybe it has not disappeared as much as you think…

To understand why so many millions of people strive every day to learn these two languages, we have to go back to one of the things that serves as the engine of our world. Money.

Learning a new language offers a lot of job opportunities and helps to access new jobs, work in other countries, or even collaborate with other local communities.

Just as it is beneficial for workers, there are many companies that benefit from having bilingual employees. A totally practical example of this is the United States, where learning Spanish has become so popular.

When you have a company in a country where 41 million people speak Spanish, being able to communicate with these people means being able to access another 41 million customers in your national territory.

This phenomenon is perfect to explain the popularity of French in Africa, where the African population struggles every day to get jobs, being willing to become proficient in another language.

How could France use this situation to its advantage?

Remember what I mentioned to you about imperialism? Let’s translate it to economic terms. If the French government really wanted to establish itself throughout the continent, they could do so by investing in the territory and creating new companies.

Companies are a source of jobs and opportunities.If the requirement to join some of these companies was to speak French, the rate of people speaking the language would consequently be much higher.

If the requirement to join some of these companies was to speak French, the rate of people speaking the language would consequently be much higher.

What is the easiest language to learn?

And finally, to cap this battle, we have the difficulty of both languages. While it is true that both are excellent languages, many students consider Spanish to be an easier language to learn. Which is not to say that it is an easy language to learn at all, due to its many verb tenses. Which brings us to the next question, which I consider even more important than the difficulty of both languages.

Should you learn some of these languages?

And that’s a question only you can answer! But if you need a clue, I think the answer lies in the country you are living in.

If you live in a country where Spanish is more in demand than French, or French is more popular than Spanish, don’t hesitate for a second. Go for the language you will be asked to use in your job interviews.

Fortunately, if you have a business, you can enlist the services of a translation company like ours to save you the trouble that language barriers present, and expand your customer base without having to read a ton of books or spend years learning the local jargon of both languages.

But what if you don’t intend to use it for your job and just want to use it to talk to other people? In that case, choose the one that allows you to communicate with the most people around you.