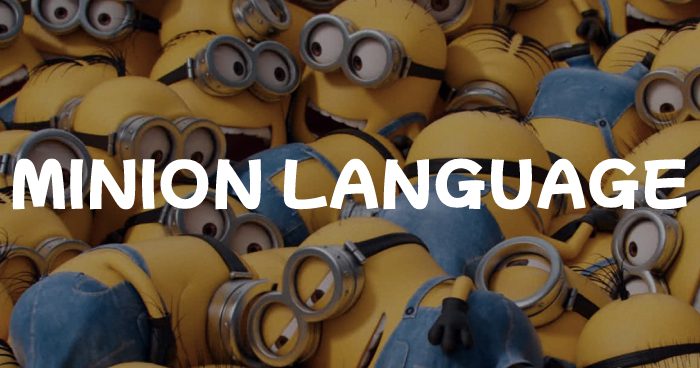 “Despicable Me” is a series that took over the world when it came out in 2010. The adorable yellow characters had a charm of their own, all due to their unique personalities and their unmistakable look. But one of the things that truly intrigued first-time watchers was minion language, also called Minionese or banana language by the fan base.

To those who never watched any of the films, Minionese language sounds like pure nonsense. However, fans know that there is a meaning behind some of the things said by the small yellow characters – even though the Minions’ language is not real.

What is minion language? Can you understand what the minions are saying? Moreover, do you know the origin of some of the words spoken by the Minions? Keep reading as we dive into Minionese and its history.

How Was Minionese Created?

So, you might be wondering:“What languages do the minions speak?” The little yellow characters speak what is known as “Minionese” to those who love the Despicable Me series. The banana language is not the first constructed language in a movie. In fact, if you look at the movie industry, you will find many series with invented languages.

Series like The Lord of the Rings and Harry Potter are great examples.

J.R.R. Tolkien, the writer of the Lord of the Rings series, was good at making up languages because he was a philologist. He created Elvish, the language of the Elves. Tolkien used different real-world languages as inspiration for his constructed ones, including German, Latin, French, English, and many others.

Harry Potter had Parseltongue, the ability to communicate with snakes. Only special witches and wizards had it. Harry Potter and the Chamber of Secrets featured Parseltongue for the first time.

When it came to creating Minionese, things were much simpler. Directors Chris Renaud and Pierre Coffin didn’t have to hire linguists – they were able to create the language themselves. In order to make sure the tone was realistic enough, they also recorded the voices of the characters themselves.

How Can You Speak Minion?

Now that you have found the answer to “What is the minions language?” you might want to speak Minionese yourself. It may sound like gibberish, which makes it quite hard to learn. Aside from learning the words, you also have to sound like a minion.

If you paid attention to the yellow creatures, you might’ve noticed that they tend to use letters like “P” and “B” very often. They almost sound like babies. If you want to learn the language of the minions accurately, you also need to consider this aspect.

The good news is that sometimes, the banana language words resemble their meaning. For instance, “Tank yu” means “Thank you”, while “Bello” means “Hello”.

Other times, you get words that don’t sound similar but point to what the meaning might be. “MuakMuakMuak” means “Kiss Kiss”. It’s almost like the minions are mimicking the action they are talking about when speaking.

The minions also use words from different languages, Like Spanish, French, and others. “La Boda” is a song the yellow characters sang during the wedding, and it means “wedding”. “Poulet tiki masala” taken from French means “Indian chicken dish”.

Unless you speak all these foreign languages, it can be challenging to master Minionese, but it is not impossible. And if you’re a huge fan of the minions, you will surely take your time with the banana language.

Now you know the answer to “What is the language of the minions?” and understand how it was created and where it took inspiration from. Do you want to speak it yourself? If you know one or more of the languages the little yellow creatures use, the learning process will be less overwhelming.