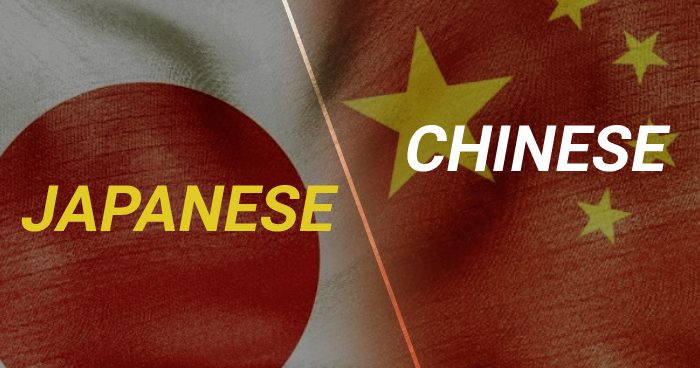 Chinese and Japanese are known for their unique writing systems. To those who don’t speak either of them, the languages look the same. In reality, though, they have many differences and sound different.

Lots of people like to say that Japanese was derived from Chinese, thinking that the writing system is identical. However, both languages have their own writing system. Whether you are trying to learn these languages, or you have a business and want to market your products in one or both countries, you must know the differences.

Japanese has Kanji, a writing system that was derived from Chinese. Despite this, there are grammatical differences between Kanji and Hanzi. At the same time, the Kanji characters have different meanings from their Hanzi equivalents.

Now, one thing worth noting when it comes to Japanese vs Chinese is that these languages have more than one writing system. Chinese has Hanzi. At the same time, there was a new writing type known as Simplified Chinese which China adopted back in 1949. The purpose of this new writing form was to make the characters simpler and improve literacy.

Meanwhile, Japanese has three different writing systems. One of them is Kanji, which includes ideographs. Every single kanji symbol represents an idea or meaning. Generally, a character will represent one word.

Then, there are Hiragana and Katakana, the other writing systems. Both of them have 46 characters which represent the same sounds, but they look different and are used for different things.

With Hiragana, you simply fill in various particles to complete the grammatical structure between kanji symbols. Katakana, on the other hand, is used to write foreign names that were borrowed.

Pronunciation is extremely important when it comes to Chinese vs Japanese. Based on your “pitch accent”, the meaning of your words can shift in tonal languages.

In both Chinese and Japanese, tones and pronunciation are very hard to master. Chinese has a high number of tones. More specifically, Lukang Township Taiwanese has eight tones, whereas Mandarin has four.

In Japanese, the meaning of a word can be different based on how you pronounce it. Also, sometimes, even if it’s hard to tell the meaning of a word based on pronunciation, you’ll have an easier time with it in written form, as different Kanji symbols can be used to represent each word. At the same time, there are some Kanji characters with more than one pronunciation, boosting the difficulty of the language.

There are different sentence structures in Chinese and Japanese. For instance, Japanese tends to be more complex. You can conjugate the verbs in multiple ways due to Hiragana characters. But in Chinese, verbs only have one form and they do not conjugate.

Another thing worth keeping in mind is that the word order in Japanese and Chinese sentences is different. While in Chinese you will have a subject-verb-object structure, Japanese has a subject-object-verb structure.

A similarity between Japanese and Chinese would be the grammatical gender. The nouns and adjectives don’t have to be changed to match gender. On top of that, the languages do not have separate pronouns for “he” and “she” – they use the same word.

The languages are similar even when it comes to the name order. When writing someone’s full name, the first name usually comes second, with the last name being placed first.

Japan is a society where mutual respect is very important, and this is reflected in their language as well. It has many forms of politeness and based on the social situation, you must know which form is the most suitable. In Japanese, polite forms are known as “keigo”. Also, based on formality, there are three different forms, respectively the polite form, the humble form, and the honorific form.

In comparison, Chinese doesn’t have as many polite forms.

Another similarity is that in both languages, most nouns do not have plural forms. In order to determine whether we are referring to a plural form or a singular one, we have to use a number next to the noun. Other times, the plural is figured out due to the context.

The Bottom Line
It’s important to understand the difference between Japanese and Chinese if you want to learn these languages. Now you know what makes them similar but also unique and you can start your journey toward discovering two of the most amazing languages in the world.