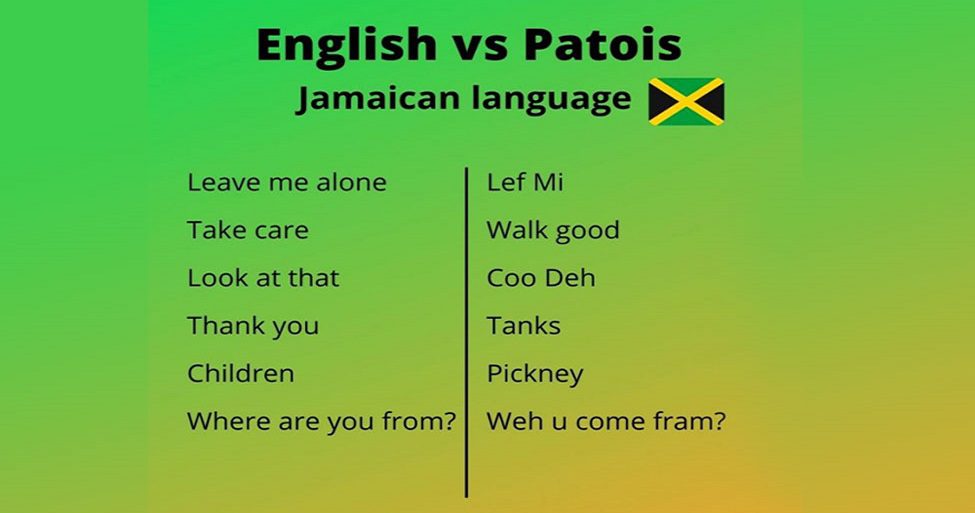 There is a slight difference between hearing someone speak in a language totally unknown to you to hearing one Creole language that has a lot of similarities with English, known as Jamaican patois.
In this article, I will tell you all the differences between English and Patois, along with the similarities and characteristics that will help you have a better understanding of this fantastic Jamaican language. I will also teach you some incredible expressions that you can use to embarrass your family while pretending to speak patois with the delivery man. So let’s dive into it!

What is Jamaican patois?

Jamaican patois, also known as Jamaican Creole, is an English-based Creole language commonly practiced in the Caribbean Sea area, primarily spoken in Jamaica. Today it is possible to find thousands of people practicing this incredible Creole language in different countries, such as the United States and the United Kingdom, thanks to the incredible power of globalization and the ease of travel from one country to another. Unless you can’t even afford the bus fare, as it happens to me.

Like many other Creole languages, Jamaican patois originated from the African slaves that were forced to work on the many plantations in the Caribbean. Since many of the people who worked on these plantations did not share a common language, the slaves began to create their own language through a combination of English, Spanish, Portuguese, and various African languages, in order to communicate with each other. It is estimated that more than 90% of the vocabulary of Patois was taken from English since it was the language used by the colonizers who dominated the Caribbean.

After the British Empire decided to abolish slavery, many of these large slave populations migrated to other parts of the Caribbean and went to work in other regions, such as Central and South America, causing the Jamaican patois to continue to spread throughout the world.
Today the Patois language is spoken by millions of people and represents a large part of the cultural identity and pride of this nation. In addition to using different variations of English words, which I’m going to tell you about in a minute, patois practitioners often communicate through their hand gestures, tone, and rhythm, making it a very expressive language. It is quite addictive to watch a Jamaican say some funny words and wave his arms while calling you a rasta. Except if he is furious. Because trust me, you don’t want to get into an argument with an angry Jamaican.

There is a group of linguists who consider patois as an alternative form of English because of the similarities between the two languages. However, I think the differences are too many to consider it an alternative to English. In fact, I would argue that it is absolutely impossible to understand patois being only a native English speaker, unless you have relatives who speak patois, grew up in Jamaica, or sat down to learn the language. But wait a minute, what about English and patois being similar? Although patois uses much of the English vocabulary, it has its own characteristics that make it unique. But first, let’s start with the things they have in common. And by that, I mean the expressions to the funny expressions I’ve told you about.

Despite these similarities, patois is still a language of its own with its own rules, which is why it is also incorrect to call it a dialect. It is not like the Texas accent, which can be understood by any American. Wait a minute, I think I regret that last statement. Patois has its own structure that makes it a unique language, so if you focus on learning it, it can be a really fun experience.

However, there is a linguistic variant of English, which also makes use of some patois words and is often confused with this language, that you could start using today, and that is Jamaican English. Jamaican English is a dialect of English that combines unique parts of American and British English, along with some expressions of patois, due to the linguistic influence that Jamaica had for having been an English British colony for centuries, and the geographical proximity between Jamaica and the United States.

As I mentioned a few seconds ago, Jamaican English also tends to use some Jamaican Creole expressions. For example, they say “duppy” instead of “ghost” or “higgler” to refer to a street vendor. Jamaicans also tend not to pronounce the “h” so expressions such as “thanks” are said “tanks”, and “them” becomes “dem”.

Another curious fact about Patois and Jamaican English is that some English words tend not to be used because they have certain devilish connotations. For example, expressions like “hello” are replaced, because “hello” contains the word “hell”, and “lo” which could be interpreted as “low”. So how should you greet a Jamaican? The first option would be to recite the holy bible ten times about saying hello, which would make you look ridiculous because it is a custom I just made up. The second option would be to say “wah gwaan, a famous Jamaican greeting that means “what’s up”, to avoid looking like a weirdo.

Knowing all these little details will help you improve your communication in case you plan to visit Jamaica, or you have a business and want to attract the attention of the more than two million people living in Jamaica. Even if you could simply use American or British English to communicate with your Jamaican audience, hiring the services of a translator who speaks Jamaican English will help you get a better approach to your target audience, and make it easier to convey your message to them.

If it is a non-academic text, you can score points by hiring a patois translator, since communicating in the Jamaican language par excellence will make your documents and advertisements be better received by your audience. There is no better feeling than reading a text or listening to a video in your native language.

It’s like when you try to play a game or watch a movie and you realize that all the voices and subtitles are in your language. The opposite happens when you want to read a novel or watch a series that has not yet been translated. Even if you manage to understand most of what they say, it can be a pain in the ass to have to pause a series every five seconds to Google what “Abonnieren Sie dieses Video” means, or look up every word you don’t understand in the dictionary. It makes you feel disconnected from what’s going on, and that’s a luxury you can’t allow your audience to experience when you’re trying to capture their attention.

Speaking patois or Jamaican English will help you build relationships more easily than simply communicating in British or American English because you will be showing interest in the other person’s native language. And interest is always attractive. Especially if you look like a supermodel and are a millionaire. I’m not.