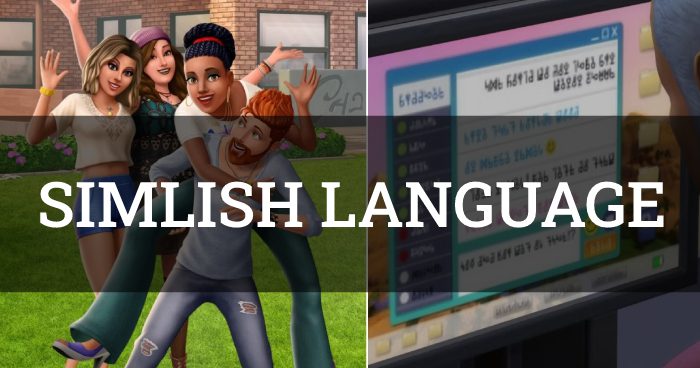 Have you ever played any of the Sims games? The Sims series is one of the people’s favorites in terms of gaming. It allows you to create your own characters and families in a simulation of real life. It’s one of the bestselling games ever, having sold over 400 million copies in the whole world already.

Whether you’ve played older versions like The Sims 2 or the latest release, The Sims 4, you may have noticed one thing: the characters are communicating with each other in quite a peculiar way. The Sim’s language sounds like gibberish, yet it’s always amusing to hear the odd phrases your sim uses to talk to others.

But what led to the creation of this unique language, and who can speak it? Let’s dive into Simlish.

The Creation of the Sims

It might sound a bit crazy, but a firestorm was the spark that led to the Sims’ roots being planted. In 1991, Will Wright lost his house to an Oakland firestorm. As a result, he built a virtual dollhouse as he was replacing his old house and his belongings. So, his real-life experience was used as an inspiration.

As he was developing the virtual house, he thought it would be a great idea if he turned it into a video game. So, he went to the Maxis board of directors and revealed his idea to them. But the directors were not so sure about it. They didn’t think it would be the most successful game, so they didn’t have any interest in developing it.

Later, in 1997, Electronic Arts bought Maxis. With the new board of directors, who showed more interest in the game, The Sims series finally had a chance to be brought to life.

Wright created a game known as SimCity, which was very successful. Seeing this, Electronic Arts thought that developing this series would be a good idea, bringing lots of people into this community.

In many games, the characters speak English or a different real language. But The Sims series was about to be different, as Wright envisioned a more successful game with a unique language. So, he developed the Simlish language.

According to him, the game required dialogue, but he didn’t want to use real language to make the experience boring or repetitive. So, he came up with an invented language. Not only would this new language be funny, but it would also make players try to interpret what the different words and phrases mean.

Although many people think that the Sim language might be inspired by other languages such as Romanian, Irish, Navajo, Ukrainian, and Filipino, the reality is different. All of the words are made up. Basically, they are gibberish.

Claire Curtin, who did voiceovers and was a designer for the first game of the Sims series, said that most of this strange language was created by voice actors on the spot. Apparently, there were attempts to mix living languages, such as Ukrainian or Estonian, and create something original, but the result was way different.

Some words sound very similar to the thing the Sims characters are trying to say, while others sound completely unrelated, making it hard to decipher what the Sim means.

Different Simlish Words and Phrases and Their Meanings

Do you need a Simlish translation the next time you play the game? Here are some of the most commonly heard words and phrases and what they mean:

Simlish may sound weird and hard to decipher, but some words and phrases can be memorized. If you’re a fan of the Sims series and want to impress someone with a unique language, don’t hesitate to learn the Sims language or at least part of it.