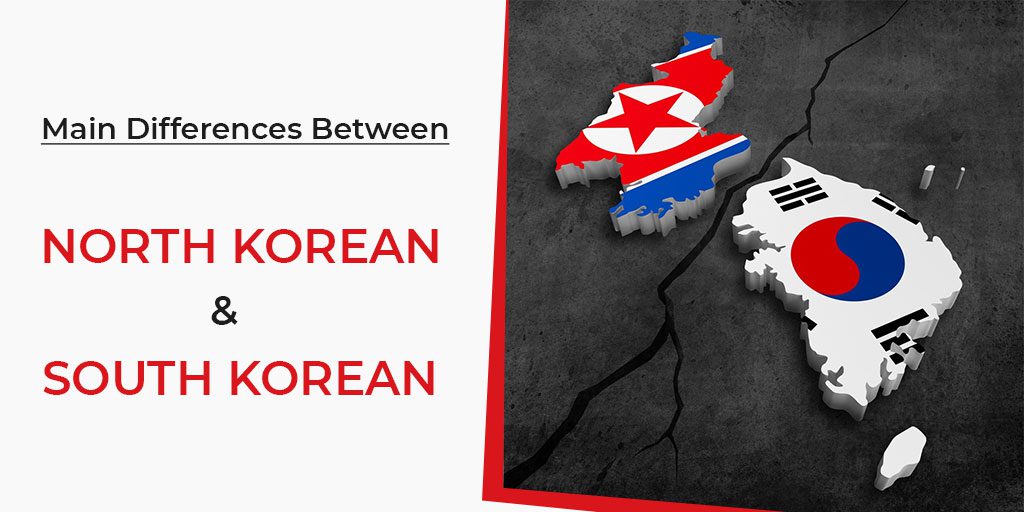 From their cultural and economic ideas to their political vision, what separates South Korea from North Korea is not just a border drawn on a map, but a completely different worldview. A worldview that has led these two great nations to hate each other for seventy years.

Could this friction be so extreme as to lead them to speak completely different languages? Do South and North Koreans really speak alike?

In this article, we will unravel the mysteries that have led South and North Korea to remain separate, to find the answers to all these questions and discover the truth that no one wants to tell you.

Why was South Korea divided from North Korea?

If there is one reason why most people think that these countries speak different languages, it is because of the great enmity between them.

In fact, it all started during World War II, when the Soviet Union began to sympathize with North Korea. After that, they formed their own independent socialist state in 1948, three years after the end of the war.
On the other hand, South Korea, with an ideology more open to free trade, eventually became an ally of the United States and created its own country, which defended capitalism. What none of these nations expected was that this division would end in a bloody conflict that would lead them to hate each other for all eternity.

What is certain is that the interest that the United States and the Soviet Union had in these lands was precisely political, due to the Cold War, which ended up not only dividing their nation, but also many other territories in the world, who were debating between capitalist and communist ideas, to determine which would rule the world. For obvious reasons, the United States and the Soviet Union never had a direct armed confrontation, since that could have ended the existence of most people on the planet.

While the United States possessed the atomic bomb, the Soviet Union had developed the hydrogen bomb, which was believed to have even greater explosive potential. And we all know how powerful the atomic bomb was to want a more lethal one to end up falling in the middle of our backyard.

To avoid ending up ruining themselves, both countries decided to opt for an even smarter solution to take care of their interests, regardless of the consequences it would bring to the rest of the world. Finance the countries that supported their ideologies, so that they would fight among themselves. Countries that would end up determining the future of humanity, and the economic model that the rest of the planet would adopt for years to come.
As you can imagine, Korea was one of the countries that got involved in the war, and it was through this conflict that ended up erupting into a civil war that would last three years and create a resentment that would never be forgotten.
Even many decades after the end of the Cold War, Korea was never the same. The ideology between the two countries became more and more distant, and with it, their language also changed.

Can the territorial division of a country cause its inhabitants to end up speaking different languages?

Having solved the reason that caused this division, all that remains for us to know is whether it is possible that the territorial division causes the inhabitants of the same country to end up speaking a different language.

The reality is that it is entirely possible, but it requires a much longer period of time, and other external factors that cause the population to migrate to another language. As we discussed in our previous articles, it could be due to some economic factor such as in Africa, where people are forced to learn French to get a better job. However, this does not strictly have to be the case. We have examples such as Germany which went through a very similar situation, with the Berlin Wall dividing its nation into two parts, literally.

What is even worse, both countries have become extremely nationalistic, claiming to be the real Korea and that the entire territory belongs to them. It is no surprise that they are constantly threatening each other, boasting about their military technology and parading their armies, with the sole purpose of demonstrating who the superior force is.

It is precisely because of this division that many neighboring countries can rest easy, knowing that as long as the enmity between Korea remains internal, they are not at risk of being invaded. But who knows what would await us if both nations decided to unite their military might, which has proven to be superior to that of many other countries in the West.

Leaving aside this fact, the reality is that South Korea and North Korea speak the same language, with one small exception. They have different dialects, just as you might find among the various countries that speak English, Spanish, French or any of the other major languages of the world.

Why are their dialects different?

If you remember what I said earlier, I mentioned that the time North and South Korea had been divided had not been enough to cause them both to speak a completely different language. However, with such different mindsets and political views, and a huge 70-year gap, there’s no way we can’t find some differences even in their most everyday expressions, such as saying “hello.”

That is why trying to translate a North Korean manuscript by hiring a South Korean translator might not be the best idea, as the meaning of some sentences might be lost by misinterpreting the meaning of some of the local expressions. It isvery common mistake in translations of literature, medicine and science books, where a single word can end up changing the whole meaning of a text.

You can even find different dialects in your own country if you travel away from the big capitals and listen carefully to what people have to say to you.

If you ever need the services of a translator, the best recommendation I can give you is to focus on a company that understands the different dialects of the same language, so that your target audience does not end up receiving the wrong message. This is one of the main reasons why at (your company)we use translators who specialize in local jargon, rather than generalist translators.

Adapting English to their language

Another clear difference between the language spoken in North and South Korea is the incorporation of some English loan words. And when I say some words, I mean 24,000 expressions from our language. Can you imagine which of the two countries has incorporated them and what has led them to do so?

Obviously it is South Korea, due to its close relationship with the United States, and its type of economy, which trades with technology and products of all kinds with the main potentials of the West, unlike North Korea, which has been isolated for 70 years and has maintained close contact with countries like Russia and China.

Which dialect is most likely to be learned by foreigners?

If we take into account everything we have seen up to the article, it is evident that the dialect most likely to be used in the world is South Korean, since it incorporates a large number of words from English, the most widely spoken language in the world. This can be a slight advantage for those who want to learn the language, as they may encounter some familiar expressions that can facilitate their study of the language. On the other hand, South Korea has a less isolationist and more open policy, causing more tourists to feel interested in knowing what this country has to offer. Leaving aside this fact, I believe that both countries have a completely interesting culture, which deserves to be known.

While their starting points are very similar, the last few decades have caused them to begin to differentiate and adopt their own unique cultural identity, which is inevitable, due to the way they have drifted apart over time. And I think the best way to get to know those differences is through their language, one of the main things that keeps them so united and separated at the same time. An experience you definitely can’t miss!