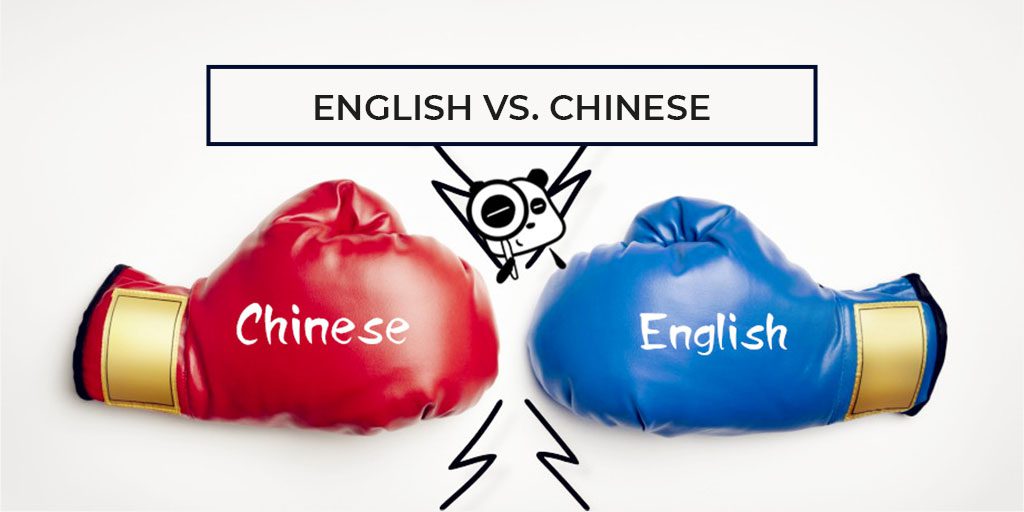 Why is English the Most Spoken Language in the World? Can Chinese Overtake It?

With the growing popularity of the Chinese language, many people are wondering if the Chinese will be able to overtake English. Is this possible? Has English’s reign as the world’s most spoken language come to an end?

In this article, we will delve into the epic battle between English and Chinese, who are fiercely competing to become the most dominant language on the planet.

Why is English the most spoken language in the world?

Before we dive into this age-old battle, we need to understand why English is such a popular language in most countries today. While we could attribute these achievements to the big international companies in the U.S. and the U.K., which managed to consolidate it as the official language of international business, I believe that the entertainment media have had a decisive factor in the popularity of our language.

You see, if you travel anywhere in the world, most people are able to recognize actors like Tom Cruise, Leonardo DiCaprio or Keanu Reeves. Thanks to the world of filmmaking, English has been able to spread to a large number of countries due to the incredible movies filmed in the English language.

So why has no other country been able to emulate this success? Part of this is due to Hollywood film productions, which have a gigantic budget and a large number of top-caliber professionals working on their films.

Naturally, if you can make a movie backed by a $300 million budget, there’s no way a masterpiece like this isn’t going to travel around the globe like wildfire. This is one of the main reasons why the American movie empire has unwittingly contributed to the popularity of English as a language.

Of course, it has not only been the movies that have played a decisive role in this expansion, as English has always been present in other great sources of entertainment, both ancient and modern, such as books, series and video games, of great international popularity. Has anyone heard of Harry Potter?

If your favorite movies and series are in a language foreign to your own, it’s only natural that you’d want to learn that language to make the most of that piece of entertainment, not to mention the decisive role our memory plays. If you spent 4 hours a day watching German reels with English subtitles, I can assure you that some words would start to get stuck in your head, as is the case for the millions of people who consume English-speaking content creators on platforms like YouTube and Twitch.

The economic reason for the popularity of English

If there is another reason why English has managed to establish itself as an international language, and which also serves to explain why Chinese has the incredible potential to beat it in popularity, it is economic.

A few decades ago, the British Empire was established on a quarter of the planet. This process of colonization is what allowed the English language to gain so much ground in the world, even if all those colonies eventually disappeared. Conquests are not only military, but cultural, making language one of the first things conquered peoples acquire.

Wait a minute. Does that mean China is going to colonize us all? They certainly could.

With a population of over 1.402 billion, if they decided to invade us, we’d be in serious trouble. But relax, because that’s not what I meant by mentioning imperialism! Although it never hurts to pray for our wellbeing…

When I say that Chinese could become the most spoken language on the planet, I’m referring to that mysterious economic reason I was telling you about a few moments ago.

Before all this culture war, both the United States and England were considered the major powers of the world. When you have two giants like these countries speaking the same language, it is totally normal that more people will be willing to learn English to do business with their companies, learn about their cultures, access new knowledge and get new jobs.

At least that was the rule before one country came along to change the rules of the game. A country with an economy so powerful that it could make the world’s major powers tremble, who only took a few years to achieve it. It’s time to introduce China!

Why does Chinese have the potential to become the most spoken language in the world?

If you remember what I have told you so far, you will have noticed that there are 3 things that can increase the popularity of a language. These are business opportunities, territorial conquests, and of course, international entertainment.

While it is true that oriental series have started to gain a lot more popularity in the West, in the same way that western series have managed to succeed in Asia over the last few decades, the reason why Chinese has the potential to be the most spoken language in the world is more linked to economic potential.

You see, the Chinese don’t need to mince words. They don’t need an Asian Indiana Jones running off a giant rock to make their language popular. Unlike English, a language that has managed to dominate the world because of its popularity in other countries, the true potential of the Chinese language lies in China. They have a huge numerical advantage, due to their immense population, which is growing every day.

Just to give you an idea, the population of China is 4.35 times larger than that of the United States, which is a great advantage and an excellent starting point from which to compete, due to its huge native speaker base.

Can you imagine what the Chinese would be able to achieve if they were to gain more followers in the world? Well, the truth is that they have already begun to do so. Today, the world’s leading companies are not only based in the UK and the US, but also in China. Just as many people are studying English to access new opportunities, millions of people have also begun to study Chinese, as we can see in primary and secondary schools, with a 100% increase in the teaching of this language, and in universities, where enrollment in Chinese classes has increased by 51%. But what has made this happen?

That’s the next topic we’ll look at!

As I told you in our last article about the eternal battle between Spanish and French, knowing English opens up a huge amount of opportunities in life. Seriously, you need to read that article, but not before you discover what I’m about to tell you.

While learning English is amazing, it has a single flaw that I’m sure some of you have been able to realize. If everyone is able to learn a language, it ceases to be special.

Wait a second. Is there something wrong with speaking English? Absolutely not! As I was saying, learning English can change your financial future and allow you to communicate with virtually anyone on the planet, which is no small thing. However, it is for this very reason that it is more difficult to find a Chinese translator than an English translator outside of China.

For obvious reasons, if you manage to master a language that only a few people in your country can speak, you will not only be competing against fewer people for jobs, but you will also be able to charge a higher rate for your services and maximize your income (in case you are in translation or any activity where knowing another language is relevant, such as tourism).

Seriously, guys. You can’t imagine how highly valued Chinese translators are in translation companies like ours.

And this brings us to the last point, which will blow your mind and help you discover the reason why the Chinese could stand up to the English in this unique and epic competition.

How can we forget the Chinese market? If you have a company or run a country, getting to market with China is a gateway to business success. With a population of 1.402 billion potential customers, learning Chinese has gone from being a luxury to a necessity in just a few years. No matter how well your products and services sell, there are some niches where you can’t sell the same solutions to the same people, so you need to expand to new frontiers. And what better place to do business than in the most populous country on the planet?

18% of the world’s population. That’s the percentage of Chinese that inhabit our planet. If a Martian or alien were to come down from the skies to abduct a human for further study, they would probably choose a Chinese, as they are the ethnic group that dominates this earth.

Compare this to the 67 million inhabitants of France or the 56 million in England, and it is not too difficult to understand why so many companies are interested in China. Having your products and services translated into Chinese can lead any company to overnight success.

Even if English is the most spoken language in the world, Chinese has the potential to one day replace it, or at least gain a larger following in the years to come. A vein of gold that will play a decisive role in the next decades of the international economy and that you definitely don’t want to miss.